San Sebastian is considered one of the most beautiful cities in Spain and the three urban beaches that give a special air to the whole city are to blame.

Each of the three beaches of San Sebastian are unique and different, especially the Playa de la Zurriola , the youngest and where good atmosphere and surfing predominate. On this beach it is usual to find a large number of people practicing volleyball in the sand or catching waves in the water. Around the beach there is always a good atmosphere, surf shops and a large number of bars and restaurants for a snack or something to eat.

The playa de la Concha is the most recognized worldwide for appearing in countless magazines and travel guides. It has been nominated on numerous occasions as one of the most beautiful in the world so you certainly can not miss it. In its bay you can practice standard paddle or canoeing, as it is protected by Santa Clara Island and the sea is usually much quieter.

The same happens at the beach of Ondarreta, separated from La Concha by a stone overhang called Pico del Loro but which in reality seems to be a continuation of it up to the slopes of Monte Igueldo.

Discover which are the three main Donosti </strong beaches> and all the characteristics of each of them so that you can choose well which one to go to. 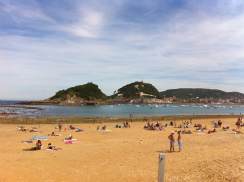 Although the most popular beach in San Sebastián is La Concha, Ondarreta beach is another one that stands…
byXabier P 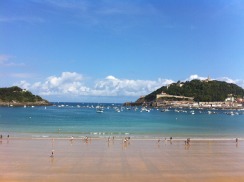 Out of the three main beaches in San Sebastián, La Concha beach is the best-known among them. It…
byXabier P
1 share
Total
1
Shares
1
0
0